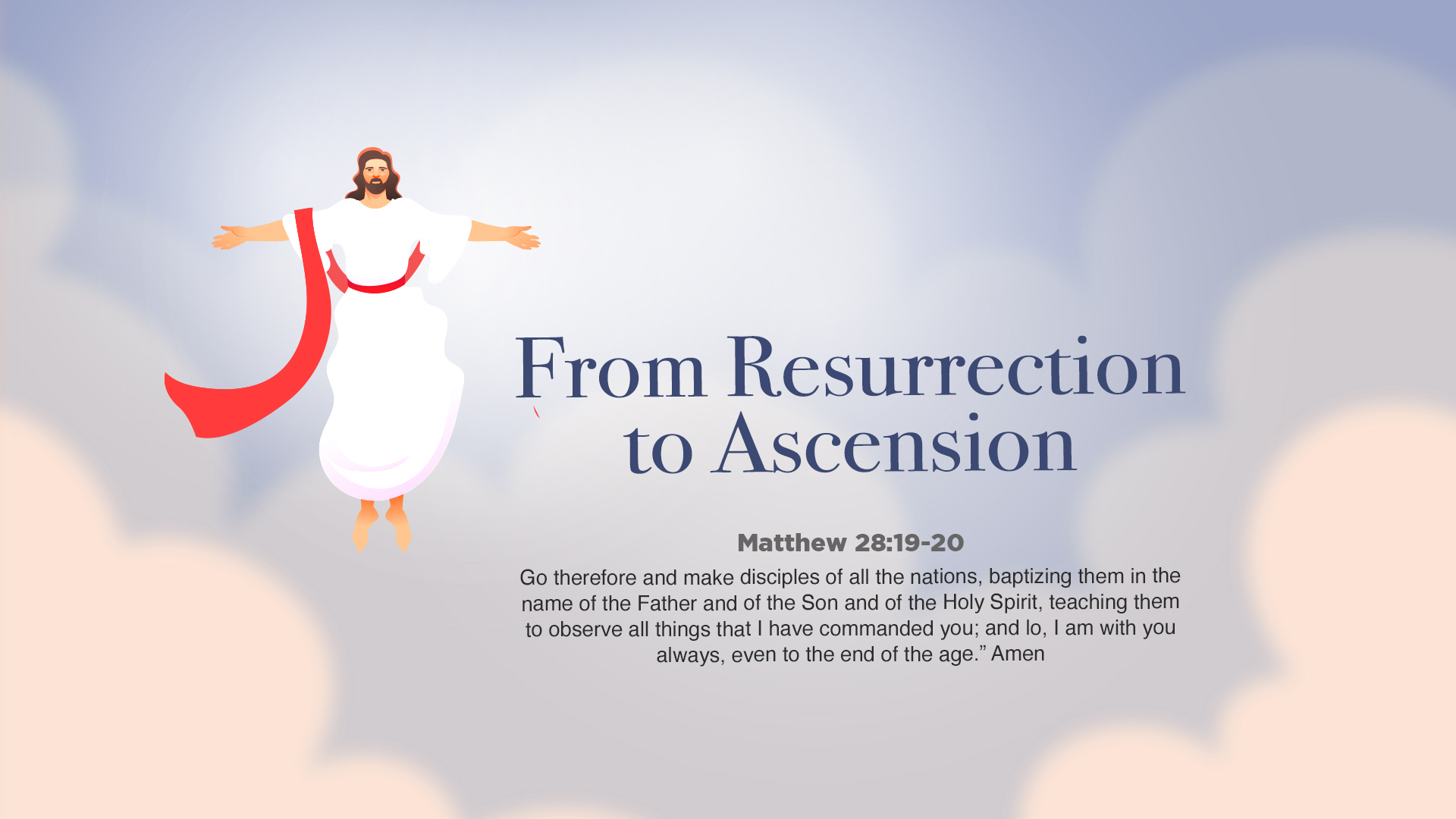 Have you ever taken stock of the forty days that Jesus was upon the earth after His Resurrection? Most believers are familiar with His Great Commission as He ascended back to His Father. What else did the Lord speak, who are some of the people the Lord revealed Himself to and what messages can we glean from this unique period of time?

And when He had fasted forty days and forty nights, afterward He was hungry (Matthew 4:2).

The number 40 has great significance in scripture. It speaks of transformation, new growth, trials and testing as well as generational change. Jesus was tested for forty days and nights in the wilderness. There was a period of forty days separating the Resurrection from His Ascension back to heaven. Moses spent forty days upon Mt Sinai seeking the Lord (Exodus 34:27-28). What is God speaking to Lighthouse and its members in this season? It is time to draw near to God; to hear His voice and flow in His purpose. We are in a season of transformational change.

Now when He rose early on the first day of the week, He appeared first to Mary Magdalene, out of whom He had cast seven demons (Mark 16:9).

It’s amazing! The very first person our risen Lord appeared to was Mary Magdalene. It speaks of the Lord’s love for sinners who have come to a place of repentance. Do we have such a burden and love for the lost? It seems that the Lord is seeking to draw our attention to lost humanity, especially in this hour. It’s time to enlarge our capacities so as to receive the Mary Magdalene’s of our day into our churches and lives. We now look at the 2nd group of people the Lord appeared to after His Resurrection.

3. Men on the Emmaus Road

And they said to one another, “Did not our heart burn within us while He talked with us on the road, and while He opened the Scriptures to us (Luke 24:32)?

Do you have a hunger for God’s Word? Jesus opened the Word to two men who had an understanding of events yet did not have the ability to believe. These men knew what the scriptures said about Jesus and even heard about the resurrection, yet did not believe (Luke 24:22-24). How many of us are like these two men? We know about God, hear His promises yet struggle with indifference when it comes to His Word. The Lord’s appearance to these men is significant and has meaning for our day. It’s time to seek the Lord for an increased hunger for His word so that its truth would burn afresh in our hearts.

until the day in which He was taken up, after He through the Holy Spirit had given commandments to the apostles whom He had chosen, (Acts 1:2).

Jesus appeared to the eleven disciples on a few occasions after His Resurrection. Jesus constantly spoke concerning things that pertained to the Kingdom of God (Acts 1:3). He also instructed His Disciples concerning the commandments through the Holy Spirit (Acts 1:2). It’s important to note that these disciples were chosen, a positon they qualified for during the earthly ministry of Christ.

Jesus answered them, “Did I not choose you, the twelve, and one of you is a devil?”

The Lord’s physical form was not immediately discerned by Mary and the two men. The same would be true for the disciples when the Lord joined them the third time while they were fishing (John 21:1-14). Their eyes were opened after the miraculous ingathering of fish per His instruction (John 21:6-7).

There are many keys as we take note of the Lord’s appearances over this forty day period of time. The number 40 signifies a new season coming upon the church characterised by Transformation. The account of Mary Magdalene demonstrates the Lord’s love for sinners and its potential for forgiveness and restoration. The Living Word coming to life is revealed in the account of the Two Men on the Emmaus Road. Their eyes were opened when Jesus broke bread before them (Luke 24:30-31). Finally, we see the Lord’s desire in spending quality time with His chosen disciples. Many are called, but few are chosen (Matthew 22:14). Let’s take time to ponder the appearances of Jesus between the Resurrection and His Ascension and learn the many keys that are presented to us. 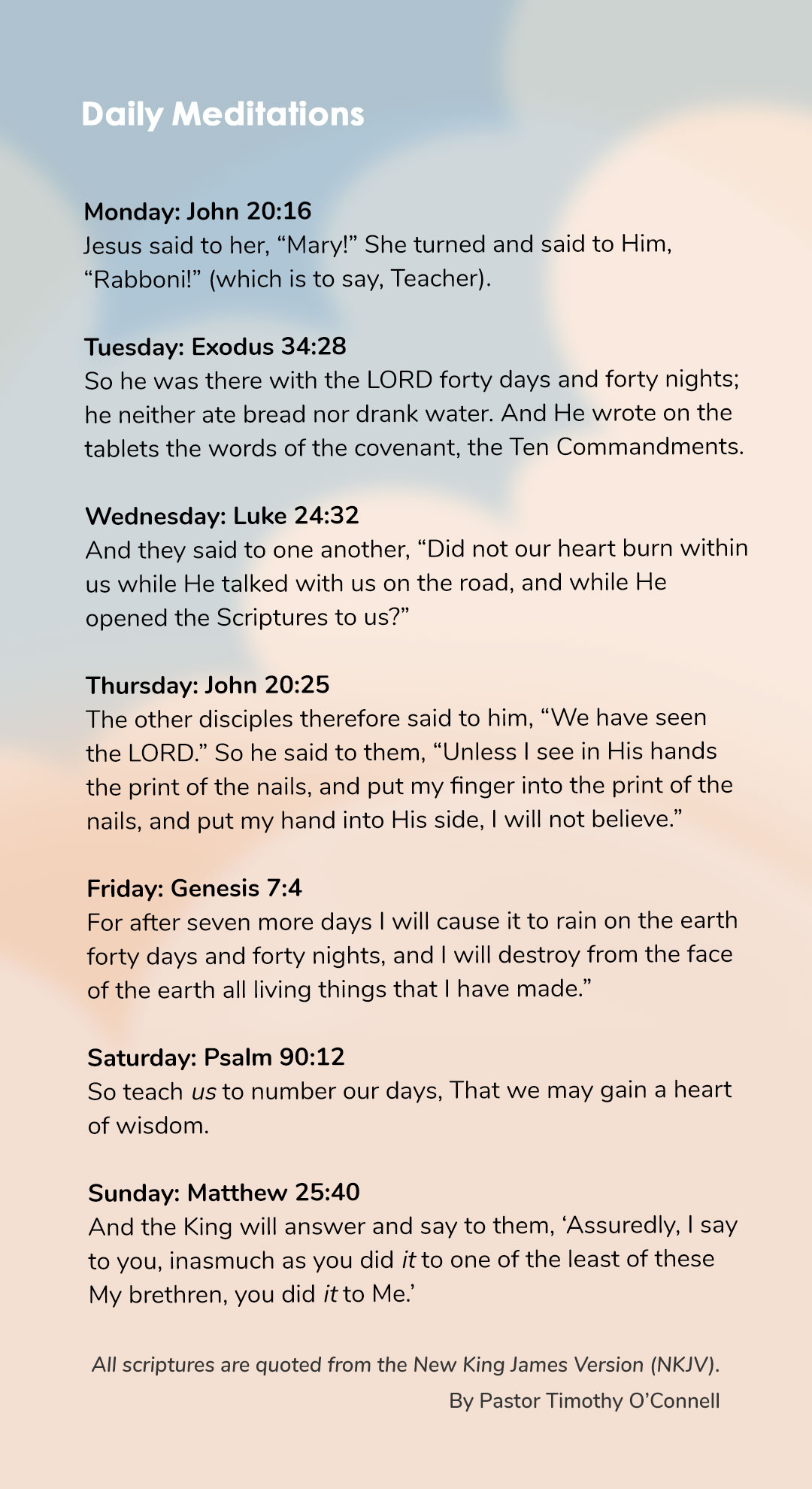