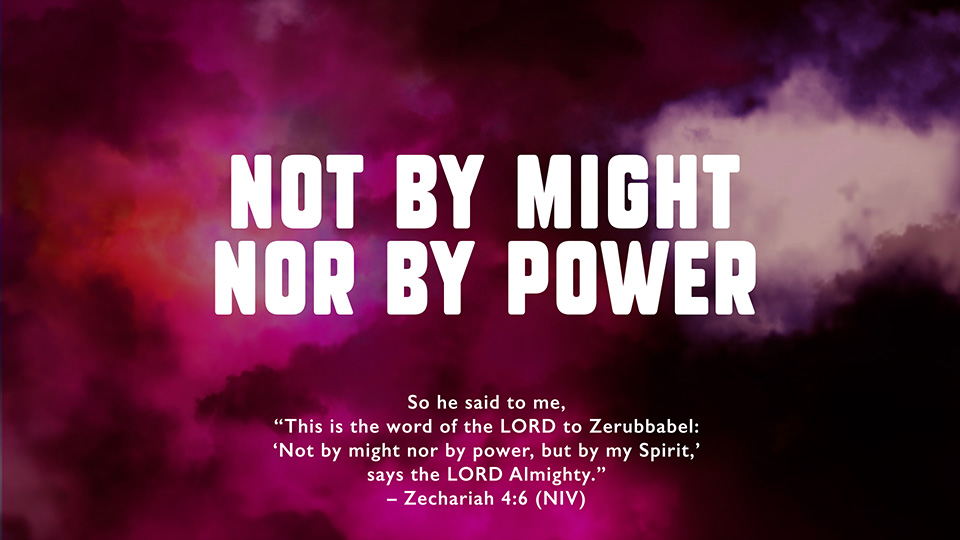 In 538 BC, King Cyrus gave an edict that authorised the exiled Israelites to return to Jerusalem and rebuild the temple under the leadership of Zerubbabel, governor of Jerusalem. During this time of rebuilding, Zechariah, who was a prophet and priest of Israel, had multiple visions which were given to him by God. In one of them, God said: “This is the word of the LORD to Zerubbabel: Not by might, nor by power, but by my Spirit, says the LORD Almighty” (Zechariah 4:6).

This message came from a larger vision, the fifth of the visions Zechariah received, in which he sees a gold lampstand with a bowl and seven lamps on top of it and two olive trees by it, which provided the lampstand with the oil needed to light the lamps (Zechariah 4:1-3). But the main message that the vision contains is in verse 6, “Not by might, nor by power, but by my Spirit”

During the time of rebuilding the temple, Zechariah and Haggai were ministers to the Israelites. Haggai spurred them on to continue rebuilding the temple and Zechariah encouraged them to repent of their sins and renew their covenant with God. Throughout the time of rebuilding, the Israelites had been met with strong opposition and had even stopped construction. Therefore “Not by might, nor by power, but by my Spirit” was an encouragement for the Israelites that it was not by their own might (the size of their military) or power (the physical strength of their soldiers) which represent human strength and resources, that the temple would be rebuilt, but by the power of the Spirit of God.

The vision of the gold lampstand represents God’s people, which in the Old Testament was Israel and in the New Testament is the Church. In this case, the vision promises the spiritual empowering of God’s people for their work of shining forth God’s light. Both for Zerubbabel and the Israelites and us today, this is to be the motto for living for God: “Not by might, nor by power, but by my Spirit, says the LORD Almighty.”

Jesus concluded His earthly ministry not with the cross, or even with His resurrection or ascension into heaven, but with the outpouring of the Holy Spirit at Pentecost, as promised in Acts 1:4, 8. It was by sending the Spirit to God’s people on earth that Jesus empowered His disciples to continue with His own work.

If we rely on God’s Spirit, it will be evident in our proclamation of the gospel, which Paul describes as “the power of God that brings salvation to everyone who believes” (Romans 1:16). Paul emphasised this principle to the Corinthians, writing of his own unwillingness to employ the day’s trendy methods (1 Corinthians 2:2-5). Paul was talking about a plain and straightforward witness, unadulterated by the eloquence of Greek rhetoric or debate so that it would be by God’s Spirit through God’s Word, that hearts were touched, minds were persuaded and lives were transformed. Later, he said the same thing in different words in 2 Corinthians 4:2. And it should be the same for us in the church today.

What about Christian growth and sanctification? What is the power that enables us to turn from sin and live holy lives? Paul answers: “For if you live according to the flesh, you will die; but if by the Spirit you put to death the misdeeds of the body, you will live.” (Romans 8:13).

Sanctification is not achieved by our own might or power, but by God’s Spirit through our continuing use and dependance on His grace. The Spirit is Christ’s gift, not a power we can physically “plug into” at will. Instead, Jesus sends the Spirit as God’s loving provision when there is faith in Christ and humble reliance on God’s power, when God is glorified instead of man, where God’s Word is faithfully taught, and where believers join in fervent prayer.

As we come out of the COVID season to shake off all spiritual lethargy and reactivate God’s plan for our lives, do we not perceive the similar challenges that the Israelites faced in rebuilding the temple? Let us also be reminded that it is not by might, nor by power but by the Spirit of God working in and through us as we trust and obey God’s Word.

Monday: Acts 1:8 (NIV)
But you will receive power when the Holy Spirit comes on you; and you will be my witnesses in Jerusalem, and in all Judea and Samaria, and to the ends of the earth.

Tuesday: Romans 1:16 (NIV)
For I am not ashamed of the gospel, because it is the power of God that brings salvation to everyone who believes: first to the Jew, then to the Gentile.

Wednesday: 1 Corinthians 2: 2-5 (NIV)
For I resolved to know nothing while I was with you except Jesus Christ and him crucified. I came to you in weakness with great fear and trembling. My message and my preaching were not with wise and persuasive words, but with a demonstration of the Spirit’s power, so that your faith might not rest on human wisdom, but on God’s power.

Thursday: 2 Corinthians 4:2 (NIV)
Rather, we have renounced secret and shameful ways; we do not use deception, nor do we distort the word of God. On the contrary, by setting forth the truth plainly we commend ourselves to everyone’s conscience in the sight of God.

Friday: Romans 8:13 (NIV)
For if you live according to the flesh, you will die; but if by the Spirit you put to death the misdeeds of the body, you will live.

Saturday: Galatians 5:16 (NIV)
So I say, walk by the Spirit, and you will not gratify the desires of the flesh.

Sunday: Galatians 5:22-23 (NIV)
But the fruit of the Spirit is love, joy, peace, forbearance, kindness, goodness, faithfulness, gentleness and self-control. Against such things there is no law.

All scriptures are quoted from the New International Version (NIV).
By Pastor Samuel Sam