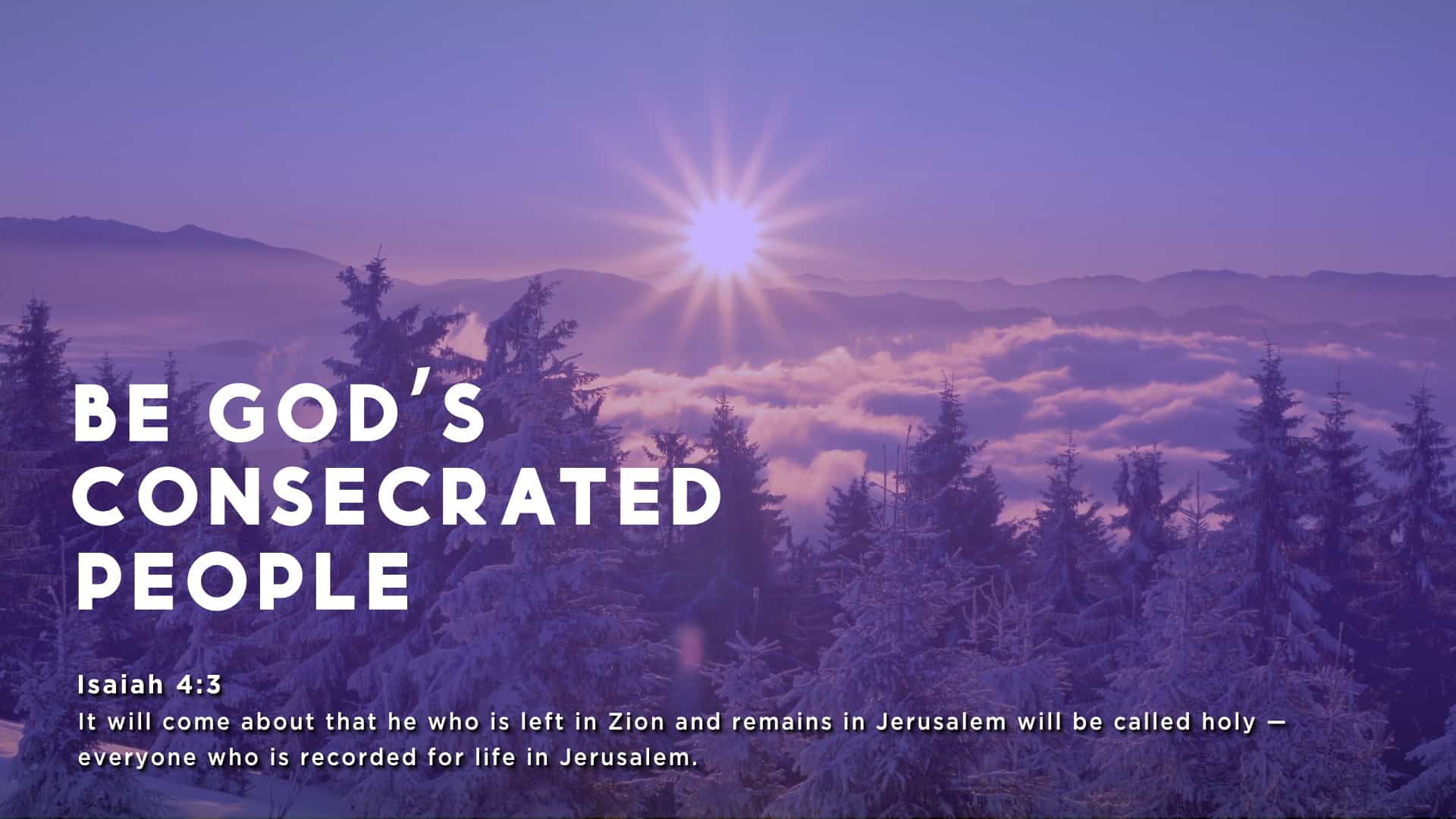 In Isaiah 4:3, the Prophet Isaiah foretold of a time when God would have for Himself a consecrated people. But He would first have to deal with them. What God wanted to do was not to destroy Judah and Jerusalem, but to cleanse and purge, and free them from what would be offensive to Him.

It was God who had chosen them and made them His covenant people. They had a unique relationship with Him. And like a Father, He faithfully took care of them. When they were wayward, He would deal with them as a nation. When the dealing was done those who remain would be His faithful remnant. After God’s dealing, a time of blessings awaits the nation in the future. So in Isaiah 4:2-6, we can see three promises God made to His consecrated people.

Firstly, in verse 2, Isaiah pointed prophetically to the arrival of the Messiah who is referred to here as the “Branch of the Lord”. This Messiah would also have a human element. Hence, the verse also said He would be the “fruit of the earth”. However we are told that not everyone would welcome the Messiah, but He would be acknowledged and embraced by the remnant who survived God’s judgment. Thankfully, we are the people who have made Jesus the Messiah, the Lord of our lives.

Secondly, we see in verses 3-4 that those who embrace the Messiah would be called holy. They would be the people who have been purged by judgment and burning. There is a divine principle here. Holiness will be the outcome when one willingly submits to and allows God’s dealings to bring about the purging effect. God’s purging will make us His holy people. Remember that God will not remove hard circumstances from our lives, but He will perfect us through those hard times.

Thirdly, in verses 5-6, Isaiah makes a reference to a scene from the book of Exodus, where God’s presence and glory were described as “cloud by day…and the brightness of a flaming fire by night”. Here the promise is that like God’s glory and presence that filled Moses’ Tabernacle, the same will be felt in the whole of Mount Zion. Prophetically here, Isaiah was pointing to the time in the future when God’s glory and presence would envelop the gathering of God’s people. This is also a promise to the church of Jesus Christ the Messiah of which we are.

In these verses, we see the key to holiness is found in knowing the Messiah. We who have acknowledged Him are indeed privileged people. As we submit to Him and allow His purging work to take effect in our lives, the outcome is a holy and set-apart life totally consecrated to Him. There is no telling of His marvellous glory and presence when we, His consecrated people, are gathered in His name to offer Him resounding worship. What a glorious sight it would be! Praise the name of the Lord forever!

Monday – Ephesians 1:4
He chose us in Him before the foundation of the world, that we would be holy and blameless before Him.

Tuesday – Leviticus 20:26
Thus you are to be holy to Me, for I the Lord am holy; and I have set you apart from the peoples to be Mine.

Wednesday – Psalm 4:3
But know that the Lord has set apart the godly man for Himself; The Lord hears when I call to Him.

Thursday – 1 Chronicles 16:10
Glory in His holy name; Let the heart of those who seek the Lord be glad.

Friday – Psalm 65:4
How blessed is the one whom You choose and bring near to You to dwell in Your courts. We will be satisfied with the goodness of Your house, Your holy temple.

Saturday – 1 Chronicles 22:19
Now set your heart and your soul to seek the Lord your God; arise, therefore, and build the sanctuary of the Lord God, so that you may bring the ark of the covenant of the Lord and the holy vessels of God into the house that is to be built for the name of the Lord.

Sunday – Psalm 11:4
The Lord is in His holy temple; the Lord’s throne is in heaven; His eyes behold, His eyelids test the sons of men