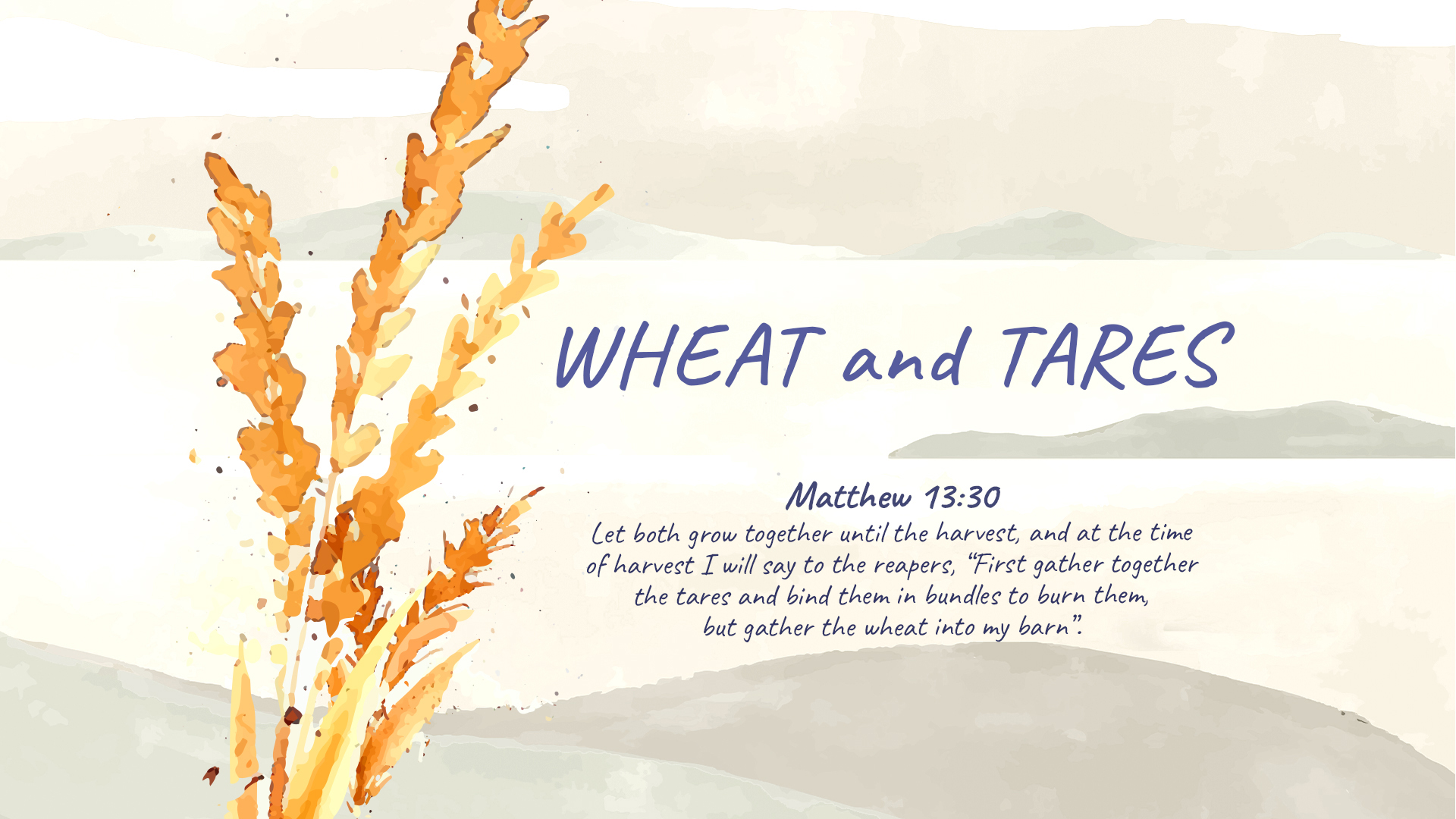 In recent weeks I have been consumed with thoughts of the harvest. There are several meanings that come to mind. There is the world-wide harvest of souls (wheat) that we all long to see coming into our churches. There is also the harvest of iniquity (tares) that is becoming more ripe with each passing day.

The parable of the Wheat and Tares is the 2nd of 7 Kingdom Parables that Jesus taught in Matthew 13. Each parable has a message that builds upon the other. The purpose of today’s devotional is to have an awareness of the harvest while helping to bring some perspective and understanding to this parable.

Where do Tares come from?

Another parable He put forth to them, saying: “The kingdom of heaven is like a man who sowed good seed in his field; but while men slept, his enemy came and sowed tares among the wheat and went his way (Matthew 13:24-25).

Think of a new Christian being born again into the Kingdom of God. A new and exciting journey has just begun. The scripture above indicates that the enemy (Satan) subtly begins the work of sowing tares amongst the good fruit. A new believer desires to become more Christ-like (wheat) in their service towards God but there is the awareness of another nature (tares) contending for attention. The Apostle Paul speaks of this dilemma in his letter to the Romans.

For I delight in the law of God according to the inward man. But I see another law in my members, warring against the law of my mind, and bringing me into captivity to the law of sin which is in my members (Romans 7:22-23).

When we think of the harvest we have to be mindful of both the good fruit and evil fruit. It is God who sows the good seed that results in the wheat unto eternal life. It is Satan who sows the tares that ultimately leads to destruction.

Wheat and Tares Growing together

He said to them, ‘An enemy has done this.’ The servants said to him, ‘Do you want us then to go and gather them up?’ But he said, ‘No, lest while you gather up the tares you also uproot the wheat with them (Matthew 13:28-29).

Should not the tares be removed now that they have been discovered? Interestingly, the instruction given is to let both the wheat and tares grow together for a season. In fact, the wheat (good fruit) could be destroyed if the tares are removed prematurely. This indicates that the growing of tares alongside the wheat is part of the developing process of the eventual harvest to come. How can we place this parable into a practical and understandable context? Let’s consider the picture of a garden.

The Planting of the Lord

The LORD God planted a garden eastward in Eden, and there He put the man whom He had formed (Genesis 2:8).

The Parable of the Sower and of the Wheat and Tares becomes clearer when viewing it through the lens of a garden. God planted man in a garden for the purpose of man becoming fruitful (Genesis 1:28). The enemy sowed his tares resulting in the fall of man (Genesis 3:1-6). The only remedy for man’s disobedience is the giving of the Lord Jesus Christ.

Are you aware that God has now planted His Kingdom within you (Luke 17:21)? Have you ever thought of your heart likened to a garden? God sows his seed (wheat) in the garden of our hearts for the purpose of bringing forth fruit. The enemy also sows his seed (tares) that eventually grows over time. If we understand this process we can better grasp the truth and message of this parable. The question and challenge for us is this: Which of these two fruits are we cultivating? Are we walking after the flesh (tares) or the Spirit (wheat)? These thoughts will be developed and personalised in upcoming devotionals.

The Time of the Harvest

Do you not say, ‘There are still four months and then comes the harvest’? Behold, I say to you, lift up your eyes and look at the fields, for they are already white for harvest! (John 4:35).

Monday: Matthew 9:38
Therefore pray the Lord of the harvest to send out laborers into His harvest.”

Wednesday: Psalm 126:6
He who continually goes forth weeping, Bearing seed for sowing, Shall doubtless come again with rejoicing, Bringing his sheaves with him.

Thursday: Galatians 6:7
Do not be deceived, God is not mocked; for whatever a man sows, that he will also reap.

Friday: Jeremiah 31:12
Therefore they shall come and sing in the height of Zion, Streaming to the goodness of the Lord—For wheat and new wine and oil, For the young of the flock and the herd; Their souls shall be like a well-watered garden, And they shall sorrow no more at all.

Saturday: James 3:18
Now the fruit of righteousness is sown in peace by those who make peace.

Sunday: Matthew 9:37
Then He said to His disciples, “The harvest truly is plentiful, but the laborers are few.