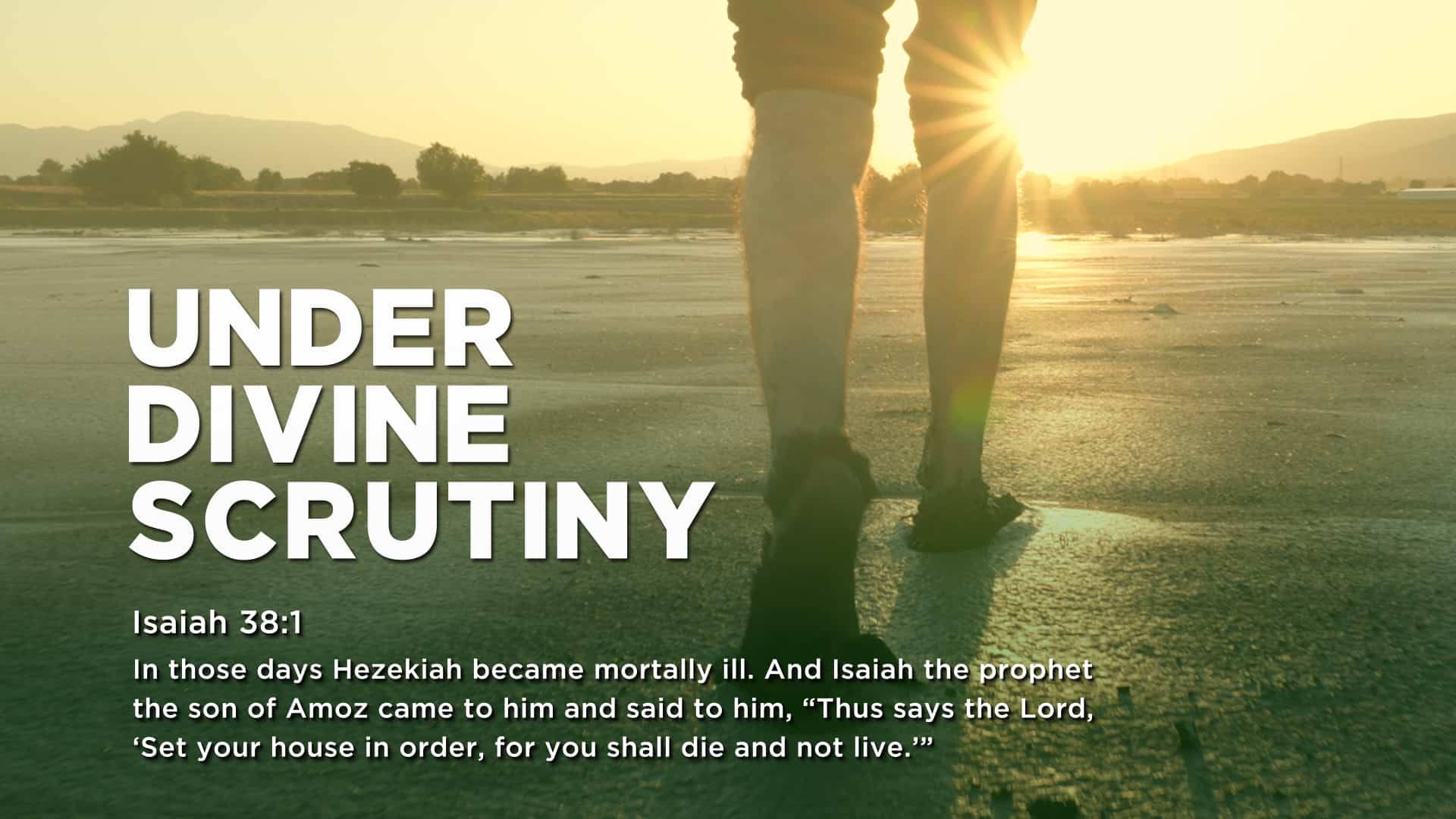 Collectively, Isaiah chapters 36-39 are rightly termed the book of Hezekiah because they narrate the events that took place in his life. And the events recorded in these chapters were not put in chronological order. What chapter 38 described took place before the threat of Sennacherib and Assyria, recorded in chapters 36-37. How do we know? From Isaiah 38:6 we read “I will deliver you and this city from the hand of the king of Assyria; and I will  defend this city.” God’s deliverance had already been described in Isaiah 37 and this promise seemed to be given after the event had happened.

Isaiah 38 began by revealing that King Hezekiah of Judah was inflicted with a serious and terminal illness and death was looming. And the LORD sent the Prophet Isaiah with a message for him. In not so many words, he was told that God wanted him to set his house in order, for he would be dying soon. In a sense, this is the mercy of God. Being sovereign, it was not necessary for Him to inform Hezekiah of his impending death, but He did. Why? It was probably that He was giving the king an opportunity to straighten his life and a chance to plead his case.

How Hezekiah responded and framed his prayer shows us that he was an unassuming man. He knew exactly what God was saying. The message “to set his house in order” suggests that there were some flaws, though hidden from the eyes of others, but never  from the sight of God. Humbly, the king accepted the message, turned his face toward the wall, and prayed to God in deep contrition. We are told that he wept profusely.

His prayer captured in verse 3 said, “Please, Lord, just remember how I have walked before You wholeheartedly and in truth, and have done what is good in Your sight.”  What he said to God reveals that he acknowledged God’s sovereignty in his life and knew that he was under divine scrutiny. He knew God was aware of how he had conducted his life and work. Or else, he would not have dared to ask God to consider his righteous life and works, had he not truly lived that way. His intercession for his own life tells us that he knew nothing in his life was ever hidden from the sight of the all-knowing God.

Isaiah 38:1-3, give us indicators of how we should also conduct our lives. How we live and what we do are never hidden from God’s eye. They tell us that God wants us to have an ordered life and that He does take notice of how we conduct ourselves. Nothing is more important than to walk uprightly and keep short accounts with God. We must, therefore, be careful how we live. Let our conduct in life be pleasing to Him. Here’s what the last part of Hebrews 4:13 says, “…all things are open and laid bare to the eyes of Him (God) with whom we have to do.” So we must live and walk righteously.

Monday – Psalm 33:13
The LORD looks from heaven; He sees all the sons of men;

Wednesday – Proverbs 15:3
The eyes of the LORD are in every place, Watching the evil and the good.

Thursday – Psalm 11:4
The LORD is in His holy temple; the LORD’s throne is in heaven; His eyes behold, His eyelids test the sons of men.

Friday – Proverbs 5:21
For the ways of a man are before the eyes of the LORD, And He watches all his paths.

Saturday – Isaiah 29:15
Woe to those who deeply hide their plans from the LORD, And whose deeds are done in a dark place, And they say, “Who sees us?” or “Who knows us?”

Sunday – 1 Peter 3:12
“For the eyes of the LORD are toward the righteous, And His ears attend to their prayer, But the face of the LORD is against those who do evil.”