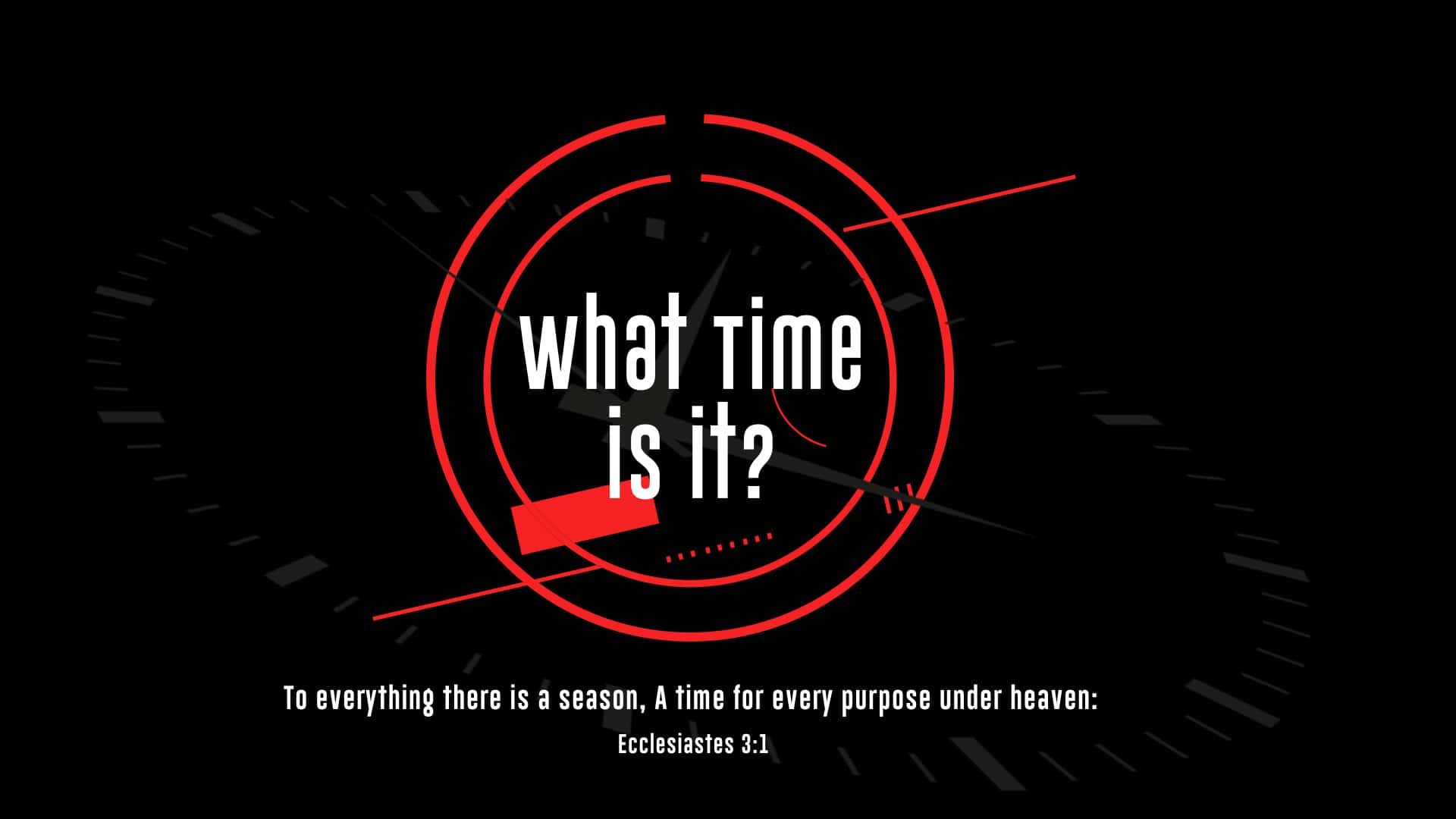 A few months ago, I had a troubling dream. I was on my way to a familiar train station in Calcutta, India to take a train that I often frequented. The set departure time was 6:00 AM. In approaching the designated platform, I found that the train was slowly pulling away. No amount of shouting or screaming could get the train to stop. All I could do was fall to the ground and lament as to how this opportunity was missed. How could this happen?

This dream was sobering, and it helped me to realise that God has a timetable. It’s not hard to compensate for missing a train but such is not the case in missing designated moments of Time in God’s Calendar. As believers we should be enquiring of God’s Timing and do what we can to ensure we are observing it. So, what time is it?

It’s time to seek the Lord
Seek the LORD while He may be found, Call upon Him while He is near (Isaiah 55:6)

God is always near, and we should always be a people who seek after the Lord. I believe there are seasons when Jesus is in our midst in unique ways. Think of the account of the woman who had an issue of blood. For twelve years she suffered with this incurable disease. One day, she heard that Jesus was passing by (Matthew 9:21). She pressed through the crowd and reached out and touched Jesus by faith due to discerning and acting upon the Lord’s timing. What about you? Have you been seeking the Lord over a prolonged period of time? It’s time to seek the Lord while he may be found and receive your breakthrough. He is here!

It’s Time to Wake Up!
Awake, awake! Put on your strength, O Zion; Put on your beautiful garments, O Jerusalem, the holy city! For the uncircumcised and the unclean Shall no longer come to you (Isaiah 52:1).

Let’s face it! We all need a wake-up call to the reality of the day and hour in which we live. Our adversary is very good in lulling God’s people into complacency and indifference. This can also be viewed another way. It is time to wake up with the purpose of spending more quality with the Lord. Do you sense the urgency? If so, are we vigilant and awake?

Be sober, be vigilant; because your adversary the devil walks about like a roaring lion, seeking whom he may devour (1 Peter 5:8).

A primary key to discernment is knowing the enemy’s tactics. We no longer have the luxury of pushing the “snooze” button. It is time to arise and make time for the Lord (Mark 1:35). This will enable us to know His battle plan and direction for our lives. It is also instrumental in breaking any “comfort zone” model of Christianity that can keep us in a spiritual stupor.

It’s Time to Let Go!
Do not remember the former things, Nor consider the things of old (Isaiah 43:18).

One of the greatest hindrances to experiencing a fresh move of God is in the holding on to old mindsets and traditions. God can be limited if we do not allow the Spirit to move in His own special way. Once again, it is vital that we understand the Times and the Seasons of the Lord (1 Chronicles 12:32). Let’s consider the following verses from Nehemiah.

And Nehemiah, who was the governor, Ezra the priest and scribe, and the Levites who taught the people said to all the people, “This day is holy to the LORD your God; do not mourn nor weep.” For all the people wept, when they heard the words of the Law (Nehemiah 8:9).

Here we see a transition taking place. Ezra made Israel aware of their sin which led them to Repentance (Nehemiah 8:8). Ezra then told them to no longer mourn nor weep. They were instructed to let go and experience the Joy of the Lord which would now be their strength (Nehemiah 8:10). Ezra discerned the time and season resulting in Israel being able to make this transition. Are there things in our life that we need to let go of?

Time is almost up!
Again He designates a certain day, saying in David, “Today,” after such a long time, as it has been said: “Today, if you will hear His voice, Do not harden your hearts…”(Psalm 95:7-8).

Time is one of the most precious commodities that God has given to man. May we learn to steward it well while having the ability to Tell Time according to God’s Calendar.

Monday: Galatians 4:4
But when the fullness of the time had come, God sent forth His Son, born of a woman, born under the Law,

Tuesday: Habakkuk 2:3
For the vision is yet for an appointed time; But at the end it will speak, and it will not lie. Though it tarries, wait for it; Because it will surely come, It will not tarry.

Wednesday: Psalm 102:13
You will arise and have mercy on Zion; For the time to favor her, Yes, the set time, has come.

Thursday: Luke 19:44
and level you, and your children within you, to the ground; and they will not leave in you one stone upon another, because you did not know the time of your visitation.”

Friday: Jeremiah 8:7
Even the stork in the heavens Knows her appointed times; And the turtledove, the swift, and the swallow Observe the time of their coming. But My people do not know the judgment of the LORD.

Saturday: Galatians 6:9
And let us not grow weary while doing good, for in due season we shall reap if we do not lose heart.

Sunday: Genesis 18:14
Is anything too difficult for the LORD? At the appointed time I will return to you, according to the time of life, and Sarah shall have a son.”

All scriptures are quoted from the New King James Version (NKJV).
By Pastor Tim O’Connell